The #SongaNaMili competition has its first winner, Damaris 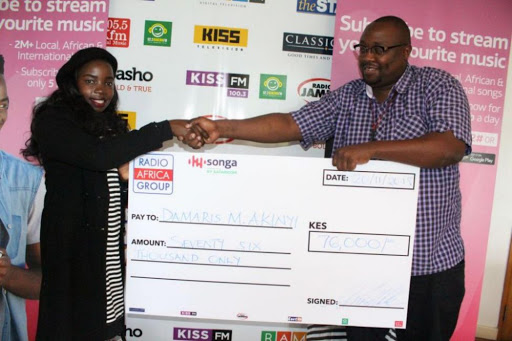 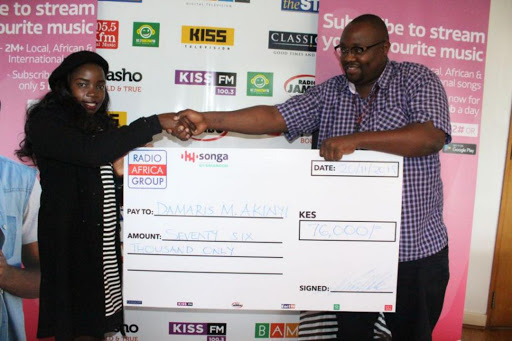 Songa By Safaricom launched the exciting Songa Na Mili competition two weeks ago and today, they awarded their first winner. It was a superb day for Damaris Akinyi who walked away with a cool sh. 76,000/= after she guessed the sound from the song "Sema Milele" by Gilad.

Damaris said she first heard about the Songa Na Mili promo on radio.

"I heard about the competition on my way to work in a matatu on a breakfast show", she continued

Winning the money has come at the best time because the family needed money to pay school fees for her younger sister.

"I will use some of the money to help my mother pay my sisters school fees who is still in campus." she said.

One thing Damaris stated is that she loves the Songa By Safaricom app because she plays music to set the mood for her day, especially with the daily playlists. The fact that she loves music and enjoys the app made it easier for her to win the Songa Na Mili competition.

Damaris stated that she will be using some of the money she won at the 30 Billion Concert headlined by Nigerian superstar, Davido who will be gracing the country courtesy of Songa By Safaricom, KCARL Entertainment, KISS FM and Classic 105.

Brian Chege, Songa By Safaricom's head of content and A&R, stated that they came up with the Songa Na Mili idea as an incentive for the fans of the app.

"The chance to win a million is an incentive for non-users to get on the app and discover new music, our vast variety of music genres, playlists, and for users to further engage the app as we push to retain them."

Brian confirmed that the competition will go on because as the name suggests, the target is to give away a million shillings.