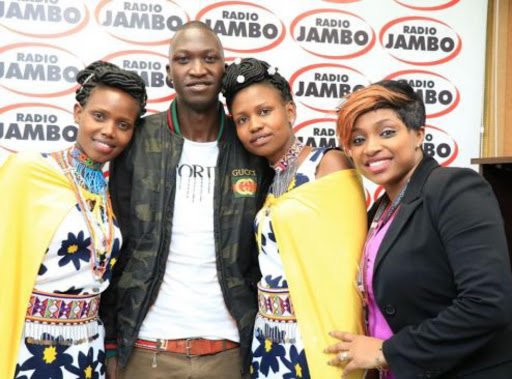 tom.mako.
A few days back, one moran in Kajiado namely, Tom Mako shocked the nation after he married two women at one historic wedding.

On Monday, Massawe Japanni hosted the man of the moment together with his beautiful wives who wore matching outfits on her 'Ilikuwaje' segment.

Mako happens to be a last born child in a family of nine, having also been brought up in a polygamous family after his father married two wives as well. Clearly ...like father like son.

According to Mako, the wedding was just a 'normal' thing that he wanted to give his wives, but he is grateful for the fame and attention that came with it all.

How did his wives meet the ladies man?

One thing that came up in the interview, is Mako's education background. Having dropped out at class seven, it seemed ironic that he went on to marry women who are quite learned than him, and he admitted that it is a challenge for him.

Mako is blessed with four kids having sired two kids with each of his wives.

He revealed that his wives live in different homesteads but one thing that is pure and sweet is the fact that his entire family live harmoniously without bias.

Catch the entire interview below.