'I can't support crap if it's dirty, I won't play it' Massawe explains why she attacked Khaligraph 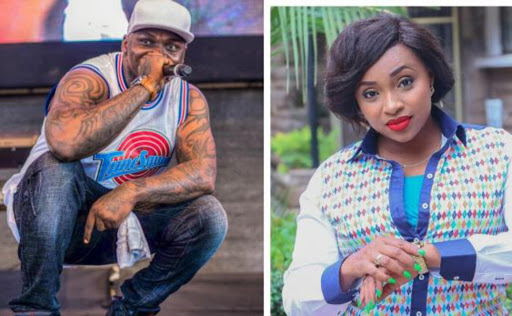 This is after she posted a video on her Instagram page, of rapper Khaligraph Jones serenading TV presenter, Betty Kyallo, with one of his sexually explicit songs, which the TV siren seemed to enjoy as she fought so hard to control blushing.

The video which was originally posted on Khaligraph's social media, got Massawe cringing and she couldn't hide her disappointed in both the song's content as well as Betty Kyallo's reaction on her caption.

How do I even back announce this song on-air???? Support Kenyan music activists leteni opinions na mawe..  what's there to dance to?

Her post which has since garnered 20,000 views and more than 900 comments, attracted criticizers and supporters alike as many made their opinions known regarding the song which is full of vulgar language and Betty's reaction.

This comes at a time when Khaligraph bashed Kenyan presenters for not playing Kenyan music and even offered to pay for 10 Kenyan radio presenters to go and visit the lovely land of Nigeria 'to see if they will be recognized by their Nigerian fans.'

We caught up with the Bustani la Massawe host and she did not mince her words regarding the whole issue and she came guns blazing blasting Khaligraph for his act which she termed as 'demeaning' towards miss Kyallo.

Asked about the music and the whole debate revolving playing Kenyan music, the mother of three said; I am sorry I cannot support crap if it's bad it's bad, it's dirty I won't play it.

The video which was posted by Khaligraph hurt me as a woman and a mother of daughters, honestly it demeans a woman. Said Massawe.

Then when I saw Betty Kyallo standing next to Khaligraph, to be honest the entire thing was belittling Betty Kyallo and it got me wondering, what sort of lyrics are these?

I can't deny the fact that Khaligraph is one of the biggest hip hop rappers in this country, he's good but on this one I don't agree with him.

Many people criticized me saying that we play a lot of Bongo music which also contain vulgar language but their songs have hidden meanings.

Someone asked me about Kwa Ngwaru, am sorry I don't know what Kwa Ngwaru means but it has a hidden meaning and it's a song that I would listen with my child and a grown up, because it's not too obvious that it's vulgar. I am sorry I cannot support crap if it's bad it's bad, it's dirty I won't play it!

The mother of three also went ahead to remind these artists of her zeal and drive to support and play Kenyan music by naming a few up coming artists she has hosted in her show, a segment she has every Friday afternoon.