'We want to get them enjoying football': United interim manager Solskjaer reveals 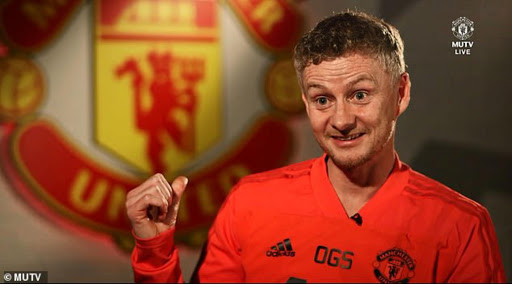 Ole Gunnar Solskjaer insists his first job as interim boss of Manchester United is to get his stars enjoying their football again.

The Norwegian has arrived on a six-month loan deal from Molde to replace  after the Portuguese was sacked on Tuesday morning.

Mourinho's tenure at Old Trafford came to be defined by his fallouts with some of the club's big names, most notably Paul Pogba, Anthony Martial and Luke Shaw.

And speaking to MUTV, Solskjaer admitted he needs to inject the feelgood factor back into his squad, and the club.

'It's great. It feels like coming home. It's been a few whirlwind days. It's been very hectic. It's great to see everyone again,' he said in his first interview since his return.

'It's six months, I'm going to enjoy the ride. I'm back home. It's about seeing the players, seeing the staff and of course just being myself.

'I know the club is in the process of finding a new manager and I'm just going to be myself in the meantime.

'With me of course is (assistant coaches) Kieran (McKenna) and Michael (Carrick) and the rest of the staff. We just want to get the players enjoying football.'

Players such as Pogba have been left out of the starting line-up in recent games, while it has been revealed that the former Chelsea manager  before leaving United after he complained of a back problem ahead of United's win over Fulham on December 8.

However, Solskjaer insists that every player will start with a clean slate under his watch.

'The amount of games coming up is no problem because you have got this squad, an amazing squad of players we have got,' he said.

'We have got 23, 24 players, they are all quality and they will all get a chance with the amount of games coming up and they will have a chance to show they are Manchester United players.

'Everyone in the squad knows: "I've got a chance now". Because whatever has happened, has happened. So from now everyone starts on a clean slate and we want players to perform and to give them the chance.'