“We coordinated with police manning a roadblock in Homa Bay town and intercepted the vehicle which was heading to Bond. They intended to inter the body secretly.” Alizungumza Njoroge. 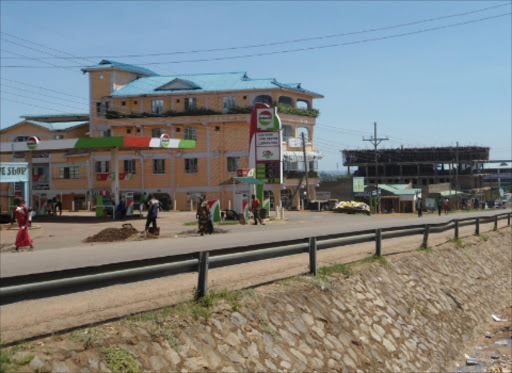 “Twelve of them with their unknown identities had escaped to unknown destination. Scene visited by police and search is underway,” Taarifa hiyo ilisema.

Okello had been suffering from throat cancer and had been treated at places including India. His body was taken to Lee Funeral Home.

Richard Solo, who is former North Kamagambo MCA and the manager of Okello’s office, said the Senator will be missed as he was a dedicated leader.

Okello, a former radio journalist, surprised his opponents when he won the August 8, 2017 election as he had not been campaigning actively.

While receiving his certificate from the IEBC at Migori TTC, he jokingly said: “I congratulate my worthy opponents … as you can see I have lost weight.”

He succeeded Wilfred Machage who opted to vie for the Kuria West parliamentary post.

Okello’s victory was attributed in part to his popularity as Ramogi FM morning show presenter and his closeness to Governor Okoth Obado.

When he spoke to the Star on March 1 while receiving treatment in India, he said he was doing well and that he was still performing his duties.

Okello asked residents to work closely with their leaders to ensure development after the heated elections season.

“Despite being sick, he continued to manage his office and often sent leaders to represent him at major social functions,” Solo said.

“He skipped the rally in Homa Bay because he had sought treatment in India. He went there for the second time before going to MP Shah,” Solo said.

Raila explained the Senator’s absence at the Opposition’s rallies in the county.

On March 1, during the Migori county devolution forum which the Senator missed, Uriri MP Mark Nyamita told residents that his treatment had been going on well.

“I know there has been the complaint that our Senator is unavailable. On behalf of MPs in Migori, I inform you that Okello is unwell,” Nyamita said.

By phone today, the MP termed the Senator’s death a big loss for the county.

“He was a leader who embraced all his colleagues and never quarreled with any of them because he loved peace,” he said.

It was reported in May that nine MPs and four Senators were among thousands of Kenyans being treated for cancer in Indian hospitals.

The identity of the MPs could not be revealed but most of them were booked at Apollo Hospital outlets in New Delhi and other cities in the country.

A girl committed suicide in Migori county on Wednesday night after scoring C- (minus) in the just released KCSE results.

Caren Onyango, 22, of Moi Nyabohanse Girls Secondary School took her own life by jumping into a well after failing to make it to the university entry cut-off point.

The girl, who hails from Osingo village in Suna East, had repeated form four probably with the hope of doing better than last year when she scored the same grade.

Migori county police commander Joseph Nthenge said the girl’s parents castigated her after they received the results via SMS.

“They started to quarrel her and castigated her on why she failed for a second attempt without getting university cut off point,” Nthenge said over the 11pm incident.

“The family was alerted by a younger sibling that the girl had threatened suicide after she left her parents still quarreling.”

The family, which took time to locate the girl, found her dead in the well. The body was taken to Migori referral hospital mortuary.

Nthenge warned parents against piling pressure on candidates over the results.

A gold miner from Migori committed suicide after his wife left over claims he was having an affair with another woman.

James Juma, 30, reportedly hanged himself on Tuesday night after he found his wife and children had left him.

“When he realised his wife had left, he entered their rental house and used a rope to commit suicide,” Suna Lower location chief Samuel Yogo said.

Neighbours said they got suspicious past 10pm when there was no sign of activity in Juma’s house.

“When they checked, they found him dead in his bedroom,” Yogo said.