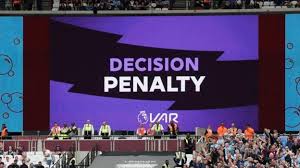 Video assistant referees will be used in the Champions League from the 2019-20 season, Uefa has announced.

The system – used at the 2018 World Cup in Russia – allows referees to review footage of key decisions.

President Aleksander Ceferin said Uefa was “confident” it would have time “to put in place a robust system”.

He added it would also provide sufficient time to train match officials to ensure an “efficient and successful implementation of VAR” in “the world’s flagship club competition”.

VAR was under intense scrutiny at the World Cup, where its use was allowed to clear up incidents around the awarding of goals, penalties, red cards and in cases of mistaken identity.

Australia’s A-League was the first top-flight league to use the system in 2017, with Major League Soccer in America soon following.

England’s Carabao Cup is using VAR in all fixtures held at Premier League grounds this season.

This is going to be part of a general falling in line from the major confederations and the big leagues over the next 12 months.

I think Uefa were waiting to see how VAR fared at the World Cup in Russia. It is not without its critics but I think, on the whole, people thought it worked.

There is a lot of money at stake and I think the clubs, critically, are in favour of it. They want to see more fairness and more justice in terms of those big decisions, given what is at stake for them.

The interesting thing is that Fifa has a number of protocols in place that it has been refining for about two and a half years.

Anyone who wants to implement VAR has to stick pretty rigidly to the rules that have been set by Fifa, so if the Premier League falls in line with this – I think the expectation is that they will announce before the end of this season that they are bringing it in – they have to stick to what has been agreed.

The climax of Group B provided plenty of drama but unfortunately the football was by no means the star of the show.

The video assistant referee was used frequently throughout both games and played a huge role in late goals which allowed Spain to climb above Portugal and finish top.

And Morocco winger Nordin Amrabat was was particularly unimpressed as he was seen telling the cameras that VAR is b******* following his side’s 2-2 draw with Spain.

Morocco had been on course to end their campaign with a victory before Iago Aspas found the net with a cheeky finish in injury time.

The goal was originally given offside but the referee’s decision was overturned after replays showed Nabil Dirar had played the forward onside. The African team may have been furious but justice was ultimately done.

Watch the video below

Nordin Amrabat lets the world know what he thinks of VAR… pic.twitter.com/0ZhQHk6Av4