Kuweni serious! Kenyans on twitter mock Bomet doctors after they claimed a politician slapped them 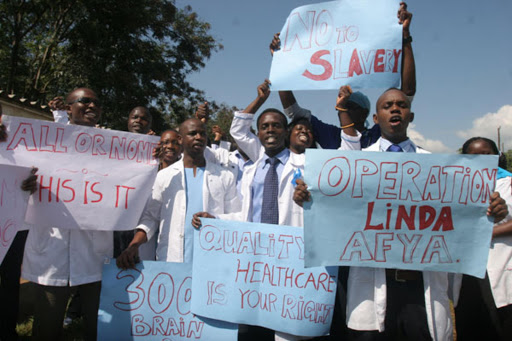 dnkisumulaunch0512c
It has been said that you don't mess with Kenyans on twitter, and this was true for one Samuel Oroko, who made some major allegations about a powerful politician from the Rift Valley. And it is all to do with the doctors strike.

One Samuel, who is the Kenya Medical and Dentists Union representative, appeared to suggest that a Governor slapped and beat union reps who were meeting at a local hotel in Bomet.

See what he posted to social media below;

Now this allegation seemed to have upset some Kenyans on twitter who responded to his claims. Read below a section of comments.

Kenyans were quick to respond to such allegations. Read tweets below;

And how many kids died in health-care facilities lacking medical attention, as you campaigned in Bomet? Just a statistic, eh?

Between a beating and helpless, poor Kenyans loosing lives due to your strike? Come on

you had lined up to be slapped or what? How can he slap all of you? Seems there is more than it meets the eye here...

nonsense hata ungevujwa mikono yote idiot how many people who are suffering coz of you, can't you let others doc's work while

on a lighter note...don't you think he was incesenced that you guys were unable to remove an elastoplast from his nose?

.pole but who is nursing you n you are on strike?