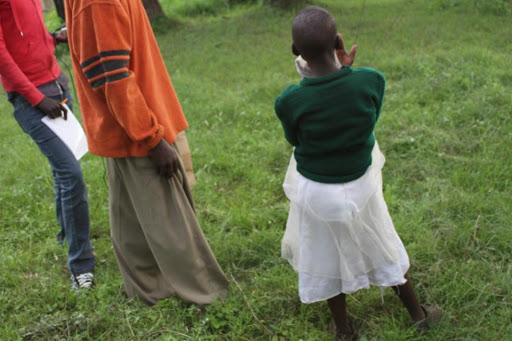 Addressing media in Kabarnet town on Wednesday, area local chief said the suspect is yet to be handed an arrest warrant.

"Yes, he is still at home despite earlier push for his arrest... after going through the medical report, police in Kabartonjo found the young girl's health on stable condition and were reluctant in arresting." Chief said.

The suspect who dropped out of primary school two years ago is currently known for terrorize young girls in the village.

“I helped in arresting the suspect last year and handed him to the police over a similar act he did to another minor, but the family intervened by requesting the matter be handled at home” Chief said adding that he has repeated it again.

According to statement, her mother had sent the girl around 12 pm to pick her young brother from a nearby private school on June 9.

The suspect [known to her] reportedly met the girl on the way before dragging her into a nearby forest, about 200 metres from her home, defiling her before running away.

“But due to her fear and discomfort she reported the matter to her mother on Monday 11” The father told media in Kabarnet town on Tuesday.

He said his daughter has since then been sick at home such that she could not be able to walk to school.

The girl was then rushed to Kabartonjo Sub-county Hospital for check up and later referred to Baringo County Referral Hospital in Kabarnet town.

Doctors report read; [the child health condition is fair after claiming to have been defiled by a person known to her on the way while collecting her young brother in school].

“Even after presenting to them the medical examination report proving that my daughter was defiled, police is yet to arrest the suspect” heartbroken father said.

However, Baringo North Criminal Investigative Officer (CID) officer Andolo Munga said he just heard of the case and he will act faster to investigate it before arresting the suspect.

The family is now crying for justice calling upon the relevant authorities to take up the matter and have the suspect convicted.

Addressing the media in sideline after attending Day of African Child on Tuesday, Baringo County Director Children Services Omuse accused the Sub-County police Criminal Investigative Department for laxity saying the suspect ought to have been arrested.