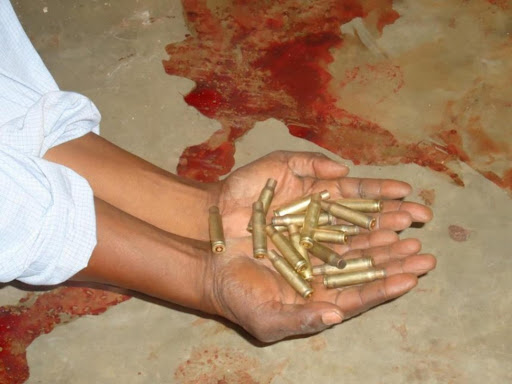 An official from DCJC who requested anonymity said the men were 'innocent youth who have not been involved in any criminal activities in the area'.

The official said the local community, including the parents of the deceased, were interviewed and they said the men were not gangsters.

Yesterday evening, the parents reported the incident in a bid to obtain burial permits.

The organisation said it will forward a report to International Justice Mission and Kenya Human Rights Commission for further action.

However, the OCPD dismissed as baseless claims the men were innocent. The men were gunned down after a shoot out in Dandora dumpsite, Nairobi county.

It is said that police acting on information from members of public raided one of the shanty shelters that is associated with drug trafficking.

Police said that as the officers approached the scene, the occupants shot at them and a shootout ensued.

Five unidentified gangsters were fatally wounded while one of escaped, a situation that has cast the police in bad light over extra-judicial killings.

After the shooting, police recovered a ceska pistol which is suspected to have been stolen from a police officer.

Residents accused the police of acting outside the law saying the suspects could have been arrested and prosecuted if they had a case to answer.

They said Alex Kithuku, one of the victims of the shooting, ran a business in the community for more than 10 years.

He dealt in scrap metal and plastics for recycling. A number of witnesses said he had no known criminal record.

Those who spoke with the media said the officers torched the premises where the five were short, ostensibly to conceal evidence.

For their part, the police claimed those that were shot were dealing in marijuana among other hard drugs.

They also claimed the operation followed a shooting incident at the dumpsite recently.