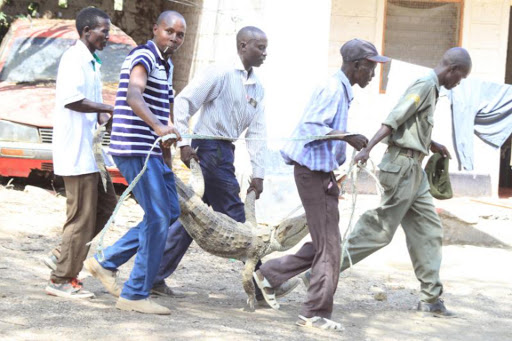 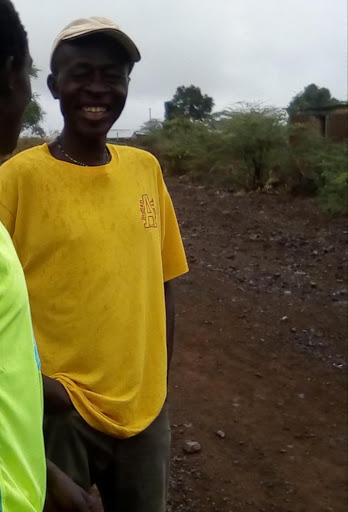 Drama as a hungry orphan crocodile shows up near Baringo police station where man who used to feed was allegedly beaten to dead on Wednesday.

“The Deceased David Owino, 40, used to feed this crocodile known as ‘Kungu’ every morning and evening. Today it must be hungry and has felt something has gone wrong after his long time servant passed on” resident Jamlick Morogit said.

However media took the photographs of the angry, lonely white crocodile, stuck at the fence near the AP post where residents turned up in masses to protest the mysterious lose of their member.

Owino lost his life after he was arrested on Wednesday and taken to the AP camp for disciplining for allegedly being drunk and disorderly.

“The officers on duty kicked him several times with hard-pointed boots until he was senseless and could not walk, he died on the spot” sources said.

Morogit said since the crocodile lost its mother at tender age in 2014, the late Owino saved it from the wrath of beach children who attempted to lynch the harmless reptile at the shores of Lake Baringo.

“Since then, they became friends and he used to communicate, feed and care for the marine beast, which have mastered his voice, so today we are shocked to see it appear rarely at the AP camp” Morogit said.

Another resident Dennis Kiptoo said they really lost a very resourceful person, adding that they will miss his unique talent and entertainment.

However, Lake Baringo Senior Curator Willy Limo with the help of the county Warden Jackson Komen managed to recapture and return the stray crocodile back to the lake.

“We appeal to the authorities concern with wildlife to visit the lake and transport all the tamed crocodiles to the orphanage because their security as they might be killed by their hostile mates, now that their human servant is no more” Limo said.

“Apart from feeding crocodiles the deceased was also friendly with dangerous scorpions as he could handle them without being bitten. He used his rear talent earn a living by entertaining guests at the shores of Lake Baringo” his colleague Loise Juma said.

The widow Alice Ekai said, “We last shared midday meal together before he left the house around 3pm, whatever transpired until his death is history” adding she has his four kids.

However, Saimo Soi Area County Commissioner Mohamed Sheh said the deceased was drunk and disorderly before his arrest.

“For now I cannot confirm if he really died in the hands of the officers because even the illicit alcohol that he took also kills and not unless investigations are complete so we can ascertain the exact cause of his death” Sheh said.