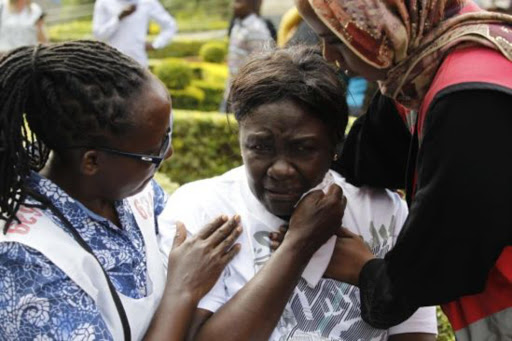 dusit.attack
Family members of those who lost their lives in the Riverside attack have visited Chiromo mortuary, to identify their loved ones.

Mortuary attendants at the Chiromo mortuary say they have received at least 15 bodies from the Dusit complex attack.

Staff at the City Mortuary have been put on standby to receive more bodies.

Police say they have rescued at least 170 people. More are still trapped on the seventh floor of hotel complex.

The terrorists, who started the onslaught yesterday (Tuesday) at 3pm, are said to be holed up at the complex gym and there are reports of gunshots being heard coming from one of the buildings.

The survivors, still shaken but grateful to have made it out spoke of professional rescue operation carried out by a multi-agency security team.

Police say the area is still a crime scene while telling the public, especially politicians to stay away.

Below are the heartbreaking photos of the current situation at the morgue, courtesy Victortko.