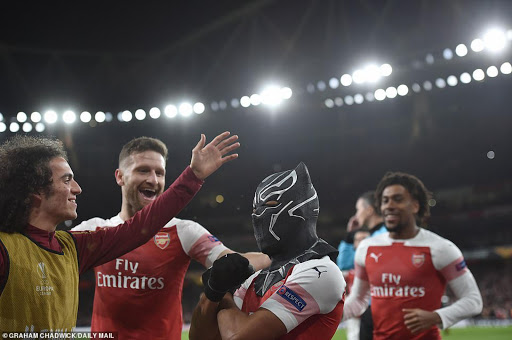 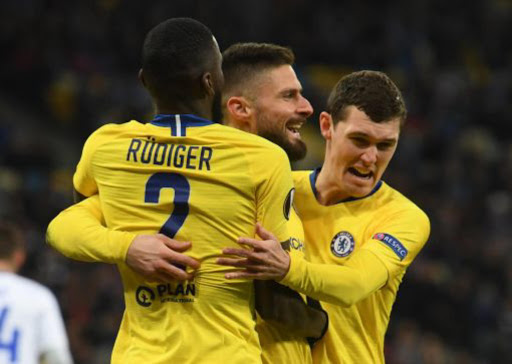 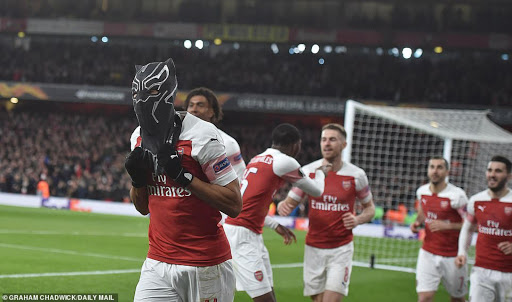 Arsenal yesterday cruised to the quarter finals of the Europa League with a three nil win over Rennes at the Emirates.

The Gunners needed a two nil win over the French side to cruise to the last eight and showed statement of intent minutes after kick off with Pierre Emerick Aubameyang giving them a one nil and minutes later Ainsley Maitland Niles doubled the lead.

Aubameyang added his second of the night after the break.

It really did not require a super hero to send Arsenal through in Europe on Thursday night. Still, Pierre-Emerick Aubameyang is as near as they have got to one around these parts, so it was only right that he should get to score the goals, and wear the mask, that confirmed their superiority.

Until Aubameyang claimed his second of the night after 76 minutes, Arsenal were relying on UEFA's away goals rule to secure their progress into the last eight. Aubameyang gave them an outright aggregate win. He celebrated by plucking a Black Panther mask from behind a hoarding, pulling it on and performing the crossed armed Wakanda Forever salute.

No matter. Wakanda is a fictional sub-Saharan African state invented by Marvel Comics, and the birthplace of their first black superhero. Since Black Panther became a hugely successful film, the Wakanda Forever sign has come to signify black excellence.

Aubameyang, born in France of Gabonese heritage, certainly represents that. This was his 32nd goal in 53 appearances for Arsenal, and in his last 13 home games, he has been directly involved in 15 goals: scoring 11, with four assists. He was the difference again on Thursday night, getting Arsenal off to the flyer they needed, then picking off Rennes in the second half just when they had started to look dangerous.

Aubameyang clearly has a thing for superheroes - and masks. He was Spider-Man in a celebration at Saint-Etienne and Batman with Borussia Dortmund, but Black Panther looks to be the one that will stick, not least as it is a named shared by the Gabonese national team.

'I needed a mask that represents me,' Aubameyang said after.

The France forward's early effort from Willian's corner set the tone for the Blues, who arrived in Kiev with a commanding three nil lead from the first leg.

Giroud swept in his second of the night from Marcos Alonso's sublime cross to register his eighth goal in the competition this season. With the visitors in total control, Alonso tapped in a third goal from Callum Hudson-Odoi's cross before the break.

Chelsea will discover their quarter-final and potential semi-final opponents today at 3pm.