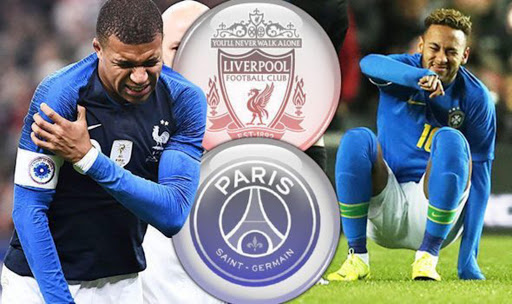 Neymar and Kylian Mbappe are doubts for Paris Saint-Germain's Champions League clash with Liverpool next week after coming off injured in friendlies for Brazil and France on Tuesday night.

Supporters who bought tickets for  v Cameroon at Stadium:MK to see Neymar were left bitterly disappointed as he came off injured after eight minutes.

Mbappe, playing for France in a friendly against Uruguay in Paris, was forced off after 36 minutes with what appeared to be a shoulder injury.

It casts doubt over their availability for two of Paris Saint-Germain's next games but Neymar posted on Instagram after the match: 'Thanks for all of the messages wishing me a good recovery. I think it was nothing serious.'

Following the game, Brazil manager Tite refused to comment on Neymar's injury. Staff for the Brazil team added that it was PSG's place to confirm the severity of the injury, not theirs, although team doctor Rodrigo Lasmar had told Brazilian channel Globo TV during the game that it was too early to tell whether he would be out.

'He came off complaining of pain,' said Lasmar. 'He felt a discomfort, he will need a bit more time to evaluate it and take a scan, but in principle it is not a serious injury.'

PSG host Toulouse in Ligue 1 on Saturday before hosting Liverpool a week on Wednesday.

started the international friendly in Milton Keynes but was forced off went he went down with a problem.

He seemed to be troubled by a pain in his thigh before being replaced in the eighth minute of Brazil's game against Cameroon at the Stadium:MK. Brazil's doctor Rodrigo Lasmar could not determine the extent of the injury at such an early stage.

He was replaced by  forward Richarlison with over 80 minutes left to play.

Fans had held banners ahead of kick-off asking for the Brazilian's shirt and boots.

He limped off the pitch before being embraced by head coach Tite.

He appeared to be having trouble putting any weight on his right leg as he went down the tunnel.

He said: 'It would be worrying because he is a very important player, as all the players (at PSG) are. No player is more important than the team.

'He's a great player though and I hope he is not injured for a long time.

'I think it's not too too serious. I hope he will be ready next week for us.'

He wasn't able to continue and was replaced by Florian Thauvin.

Neymar's absence for the majority of Tuesday's game was a blow for those who had chosen to attend. Children had gathered pitchside pre-match in the hope of getting photos with him and others carried signs asking for his shirt.